Puma vs Adidas – The Story Puma and Adidas are two famous shoe brands that are leaders in the shoe industry. Both shoe brands manufacture shoes with the latest shoe technology and innovation. Only a few people haven’t heard of Puma and Adidas. It is also a well-known fact that these two brands were born out of sibling rivalry that has lasted for decades. However, some people don’t know the full story of how the long-lasting rivalry came about. This article will explore the Puma vs Adidas rivalry, their history, and an overview of the differences between the two brands.

Puma vs Adidas – How It All Began

Two German brothers, Rudolf and Adolf Dassler, founded the company “Gebrüder Dassler Schuhfabrik” (meaning Dassler Brothers Shoe Factory) in their hometown, Herzogenaurach, Germany. The Dassler brothers started the shoe company in their parents’ home in 1919. However, the company was registered in 1924 when they moved to a proper facility.

After 28 years of founding, the Dassler brothers fell out and went separate ways. The company’s assets were split equally among the brothers, and Rudolf moved into another building with 15 employees. He transformed the storage facility into a shoe factory and founded his company, the “Schuhfabrik Rudolf Dassler (RUDA)”. This company was registered as a business on January 1948 and commenced operations on June 1, 1948. After another four months, Rudolf registered the company as “Puma Schuhfabrik Rudolf Dassler” at the German Patent and Trademark Office, and the Puma brand was born. The following year, Adolph Dassler also registered his company in 1949, and the Puma Vs. Adidas rivalry began.

Puma vs Adidas – What Caused The Rivalry

When both Dassler brothers got married, tension was already forming due to disputes between the brothers and their wives. During the second world war, the rift between them became great and kept them permanently apart.

During the second world war, Rudolf and Adolf discontinued the production of shoes and were made to turn the factory into a place for creating an anti-tank weapon called the “tank terror .”It was said that Adolf was called to the Wehrmacht, while Rudolf was allowed to stay back after having served in WWI for several years already.

No one knows exactly what happened during the second world war that ignited the rivalry and tension. No one in Adolf or Rudolf’s family has ever revealed why they became rivals immediately after the war, so the real reason for the life-long rift isn’t known. However, there are some speculations.

One fact that contributed to the dispute between the brothers was that Adolf was allowed out of the Wehrmacht to come back and look after the company shortly after he was drafted. German authorities seemed to be saying that Adolf was the company’s boss. This claim made Rudolf very mad, and they eventually had to split the assets from the business into equal parts.

Another theory holds that Adolf and Rudolf’s wives didn’t get along. Another potential cause for their rivalry is Rudolf’s suspicion that Adolf told the allies about his whereabouts. Again, another rumor says that Adolf suspected something had happened between his brother and his wife.

In 1943, Rudolf was drafted to play an active role on the front lines of war. Rudolf went into hiding and was jealous that Adolf was allowed to leave after only a short while. He then wrote a letter to his brother, telling him that he would shut the factory down to send him back to the army. This threat was the last straw that ended their already non-existent brotherhood.

Puma vs Adidas – The Popularity Of Adidas

In 1954, West Germany was allowed to participate in the world cup after lifting the earlier ban placed on Germany immediately after World War II. Puma and Adidas tried to improve people’s perception of their sporting brands and achieve international exposure. However, due to a rift between West Germany’s national team’s manager,  Sepp Herberger, and Rudolf, Puma wasn’t allowed to sponsor the team.

Adidas took advantage of this opportunity to sponsor West Germany’s national team. Sepp Herberger eventually awarded the contract to Adidas. Adidas supplied uniforms and boots to the West German players. The boots were half the weight of other boots and were made with removable screw studs specially designed to prevent slipping in case of rain.

A storm tested the effectiveness of the Adidas cleats, and the West German team eventually won against Hungary and got the world cup. Adidas received international coverage, and its popularity skyrocketed. This popularity placed Adidas in the international markets, helping the brand grow faster and bigger than Puma. Adidas’s progress heightened the Puma Vs. Adidas rivalry even more.

Puma vs Adidas – The Popularity of Puma

Puma became popular when Pelé, a famous Brazilian star athlete, wore the Puma shoes to the 1970 world cup match. Before the game began, the player bent down to “tie his laces,” bringing all attention to his Puma shoes.

The brand became very popular when Brazil won the world cup, with Pele as the star of the game. Pelé’s prowess in the field contributed to improving Puma’s brand image in the eyes of the public, leading to more sales. This international exposure was good for Puma, as it dominated a sizeable portion of the international shoe market.

Puma Vs. Adidas – The Puma Brand

Puma is a German company based in Herzogenaurach that designs and manufactures athletic footwear, apparel, and accessories. It was founded in 1948 and became a public company in 1986 when it was listed on the stock market.

The puma brand focuses on its customers’ following goals: achieving greatness, being brave, confident, joyful, and passionate. Puma lives up to its goals by helping people succeed in whatever they put their minds to doing. With over 14,000 employees across 130 countries, this German sportswear company deserves its top spot in the sports industry.

Utilizing the help of technology and the power of social media, Puma found the secret to engaging with its audience and pushing the limits in sports and culture. The brand builds trust in its audience’s hearts by always being present and helpful.

Even with strong competitors like Nike, in the Puma vs Adidas rivalry, Puma has a strong position in the market. One of its competitive advantages is that about 90% of Puma’s products are sourced from Asian regions, and most of its production and manufacturing plants are located in these regions. This location has a competitive advantage because of the relatively low cost of labor and raw materials for production. The most competitive advantage of Puma is its vast range of product merchandise ranging from sports accessories, clothing, eyewear, watches, footwear, and personal care. This broad product merchandise increases Puma’s brand image and market share daily.

Puma vs Adidas – The Adidas Brand

Adidas is also a German shoe company founded in Herzogenaurach that is very similar to the Puma company in terms of its products and target audience. However, a major difference is that Adidas focuses on adding digitization to their marketing approach.

Adidas’s goal is to be the best sportswear brand in the world. They took advantage of the latest advancement in modern technology to achieve this goal. Also, a large chunk of their budget is invested in social media marketing campaigns and other forms of digital advertising. The brand works to create excitement and enthusiasm around the world of sports using multiple outlets, including social media and retail, to converse with their customers and build meaningful relationships with them. Adidas strives to be everywhere its target audience is, to deliver a unified and unique experience for all.

Adidas’s competitive edge is its strong use of technology. Adidas uses advanced high-tech tools such as digitization to “create the new,” producing futuristic designs. By “creating the new,” the brand leans towards the future, using the most advanced high-tech in creating their shoes. Another competitive advantage is the unbelievable manufacturing speed, which gives it leverage in the Puma vs Adidas rivalry. This speed is made possible by using digitized production technology such as “3D printing technology” (using light and oxygen) and speed factory robots. An example of Adidas’s breakthrough technology is its future craft 4D shoes. Another competitive edge of Adidas is that the brand focuses on being everywhere its customers are, creating a bond between brand and customer.

Puma and Adidas are shoe brands that are unique in their own right. Puma aims to help athletes bring out the best in them and pushes them to be confident in achieving their goals. Adidas has a different approach as it focuses on being present throughout its customer journey and creating the best shoes with the latest modern technology. Although born out of rivalry, these brands have proven to be exceptional, making them top leaders in their market. We hope you gained more insight into the Puma Vs. Adidas rivalry.

Puma vs Adidas – The Story Check out this article to gain more insight into the Puma vs Adidas rivalry and their history.
5 1 5 1 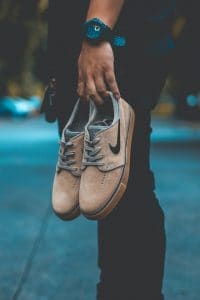 The 5 Most Comfortable and Stylish Men’s Shoes in 2023

In this post, we’re looking into the 5 Most Comfortable and Stylish Men’s Shoes for you to look into!